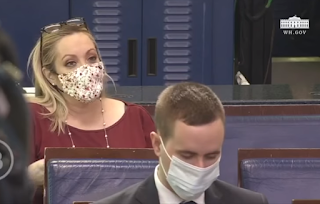 This female reporter is a rude, spoiled brat. She thinks it is her right to interrupt and publically berate the president of the United States and the president's press secretary on national television so she can hijack a White House Press conference with a False Narrative.

That scumbag needs to be banned from future press conferences and if her network does it again, that network needs to be banned from the press conferences without hesitation, reservation, equivocation or negotiation. Pride cometh before the fall and great shall be the fall thereof. That kind of insolent arrogance reeks. It's time to flush the toilet.