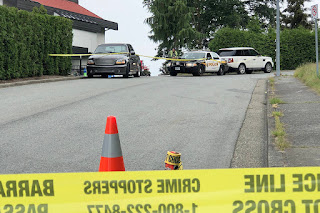 The Abbotsford News is reporting that "Karmjit “Jazzy” Sran, 43, was shot dead Friday night at around 8 p.m. in the 2700 block of Lucern Crescent in Abbotsford. The Integrated Homicide Investigation Team released his name Sunday night, and said Sran was known to police and that the shooting had all the hallmarks of a target hit.”

"The Abbotsford News reported in July 2019 that Sran had applied to the courts to be released from prison while he awaited a hearing on whether he should be extradited to the U.S. to face charges there for conspiracy to traffic in cocaine. Sran had been in prison since April 24, 2019, but the courts denied him interim release the following month. There are no court documents indicating when, or why, he was later released from prison."

"Sran was arrested following an undercover investigation that started after a truck driver was arrested in November 2013 at the Sumas, Wash. border crossing after 19 kilograms of cocaine was found in his vehicle. That man, who later became a cooperating witness with U.S. investigators, stated that he had intended to smuggle the drugs into Canada. The truck driver said he was working for two organizations, one of which had a boss he knew as Jazzy, the ruling states." If he worked for two organizations one was the red and white. So of course they bust the other one and he ends up dead. Big surprise.