Burning documents at the Chinese consulate in Houston 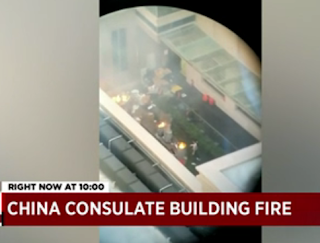 Click 2 Houston is reporting that "Houston police and fire officials responded to reports that documents were being burned in the courtyard of the Consulate General of China in Houston Tuesday night, according to the Houston Police Department."

ABC is reporting that "Trash cans full of documents are being burned in the courtyard of the Chinese Consulate on Montrose Boulevard. The consulate is considered Chinese territory, so the Houston Fire Department is standing by outside but has not entered the grounds. The Chinese Consulate reportedly must leave the building by this Friday."

Heavy dot com is reporting that "Houston Police told Fox 26 that the fire was from burning classified documents before an eviction." I guess they don't have a paper shredder.

December 2019 the New York Times reported that "The American government secretly expelled two Chinese Embassy officials this fall after they drove on to a sensitive military base in Virginia. American officials believe at least one of the Chinese officials was an intelligence officer operating under diplomatic cover." In 1987 Two Chinese diplomats left the United States after they were detained on suspicion of espionage under the Reagan Administration.

Update: The New York Times is reporting that "The United States ordered China to close its diplomatic consulate in Houston within 72 hours" which would be Friday.

The Communist Party of China's Sate run media claims that well never mind. It's the same nonsense that the New York Times is reporting because they have the same owner.

Evicting Communist Diplomats is just the first stage in regaining American sovereignty. We need an impartial court to sue for financial compensation over the coronavirus. The UN is not it. We also need to evict the Confucius Institutes from Canadian and American university campuses. We have seen where ANTIFA and Communism leads and we oppose that agenda with a passion.

Rebel News: US orders China to close consulate in Houston amid growing tension