That is George Orwell. You can find Dan Dicks on Pressfortruth.ca. He is posting videos on other platforms and you can find the links to those videos on his website. Bypass the censorship. 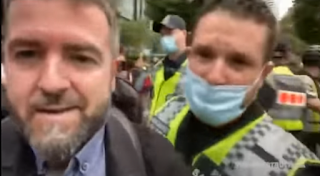 I will add that this cop that arrested Dan in the short video clip Laura-Lynn posted saved his life. Dan was filming the white trash ANTIFA losers in Vancouver during the Black Lives Matter hijacking. He showed a group of Anarchists trying to provoke a violent confrontation with the police for no reason. Dan exposed that. Then he started filming their faces as they were berating him and falsely accusing him of being a White Supremacist. As soon as the mob started throwing stuff at him, the cop escorted him away from the mob.

Dan was like why are you pushing me? In the clip Laura-Lynn posted the cop replied, I'm trying to save your life. That's exactly what he did. Dan was determined to film the trailer trash thugs and as noble a quest as that was, it put him at risk. That cop realized the seriousness of the situation. He knew that mob was going to break Dan's camera and f*ck him up so he escorted him to safety. When Dan refused to stop filming the cop arrested him to get him away from the mob. That young cop was experienced and professional. Defunding the police is a bad idea.