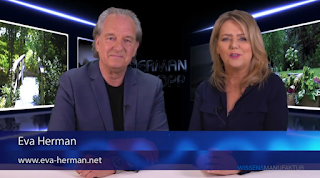 I'm gong to cite two new headlines to demonstrate how absurd the MSM has become and reiterate the need to investigate stories before forwarding them. The headline reads: Nazi sympathizer network buying up Cape Breton properties with 'colony' in mind: German report." Oh some German report said it so that means even if it's completely false, were are allowed to forward it. Not exactly. Linking isn't defamation but reprinting it is.

This flaming false narrative needs to be addressed. Nazi sympathizers? GMAFB Eva Herman claims that she is a conservative mother. Wikipedia states that "In 2003, an opinion poll by TNS Emnid declared Herman to be "Germany's favorite presenter". Starting in 2006, Herman authored multiple books that were critical of feminism and advocated for traditional female gender roles. Her books were met with widespread criticism and media scrutiny. In 2007, Herman was dismissed from her position as a news anchor at German national broadcaster ARD, after positively reviewing the family policies and gender roles of Nazi Germany."

This is what Eva actually said: "It was a gruesome time with a totally crazy and highly dangerous leader who led the Germans into ruin as we all know," Herman said."But there was at the time also something good, and that is the values, that is the children, that is the families, that is a togetherness -- it was all abolished, there was nothing left." This is her website.

Her statement was taken completely out of context for a political purpose. Likewise, the Marxist Media claims that Andreas Popp is a conspiracy theorist that promotes debunked theories. Oh really like what? Bill Gates, George Soros, Restricted movement, deprivation of liberty, forced vaccination and the corona virus. Those are not conspiracy theories, they are valid concerns.

The brother from the States Drea Humphrey interviewed expressed a concern about George Soros. Does that make him a Nazi sympathizer? I think not. This is the Twilight Zone Narrative the left keeps cramming down our throat which does not make sense and if you take 20 seconds to investigate it, is obviously false. We need to follow his advice and find alternate news sources.