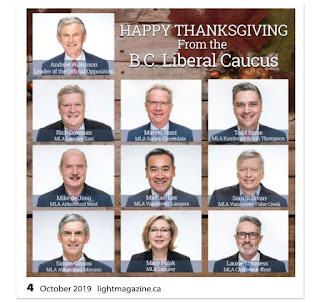 Action 4 Canada is reporting that BC NDP MLA Spencer Chandra Herbert complained about "10 Liberal MLAs for running ads in the Light Magazine, a Christian publication that upholds tradition biblical values on family and marriage and socially conservative views. Several MLA’s apologized and the leader of the BC Liberals, Andrew Wilkinson, not only apologized but said they would be backing away from advertising with the magazine, saying “there is no room for homophobia, transphobia, or any discrimination in the BC Liberal Party.”

AYFKM? Andrew Wilkinson's statement is false. There obviously is room for discrimination within the BC Liberals because he is discriminating against Christians and their right to religious freedom. The ad said Happy Thanksgiving. That's all it said. The leftists and the globalists are stealing our liberty right in front of us. That is obscene.